The aim of this article is to demonstrate the usability of the basic fonts that most people already have at their disposal. These are fonts which come with Windows pre-installed or via popular software packages.

I have tried my best to include fonts which most people already have installed but this also depends on what software you have installed. Microsoft office for example ships with a lot of free fonts and so does the Adobe Suite (which I own). Therefore some of these fonts may not be installed on your machine. However, if you are interested in designing it is likely you have some design software installed.

This is a list of my favourite fonts that I haven’t downloaded or paid for. All of these graphics were made with Adobe Photoshop. In most cases, I have added a few blending styles to liven the text up. I have also played around with the font size, letter spacing, and line height but the fonts are still standard.

In case you are not familiar already:

Serif refers to the little tags you sometimes see on the end of a letter.

Sans – Serif simply means no serif. Sans serif fonts do not have any tag like shapes.

The Fonts In no particular order: 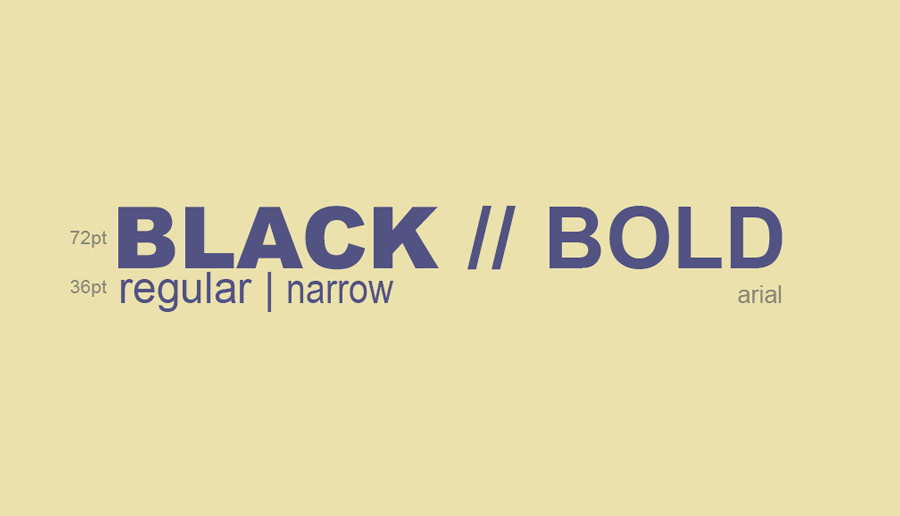 It isn’t exactly the most rock n’ roll font but Arial has definitely stood the test of time. Fonts like Arial and similar fonts like Tahoma and Verdana are tried and tested fonts that have proved their worth. Arial may lack a bit of charm but it is clean, professional and it works.

Arial is a very versatile font that has many styles, this makes Arial suitable for both big display titles and large bodies of text. A good safe font that is used everywhere. 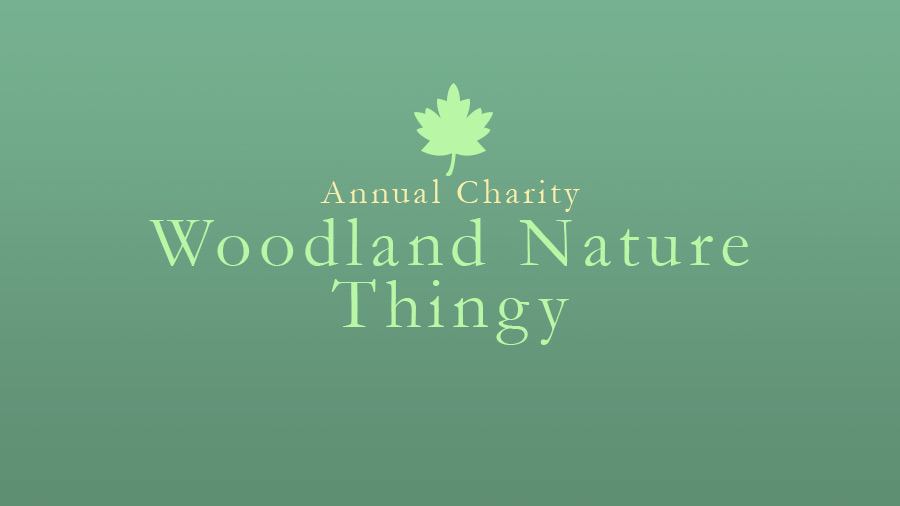 A very popular font among graphic designers and considered by some to be one of the best fonts. Garamond is an elegant font that is very neat and pleasing to the eye. For some reason the first thing I think of when I see this font is some kind of green charity or a fancy hotel. I could definitely imagine this font being used for a spa or something similar.

Garamond is a font that I think represents value and quality. If you were trying to sell something expensive and luxurious this might be a good font to use.

Overall a very versatile font that is not too rigid looks good in both lower and uppercase. 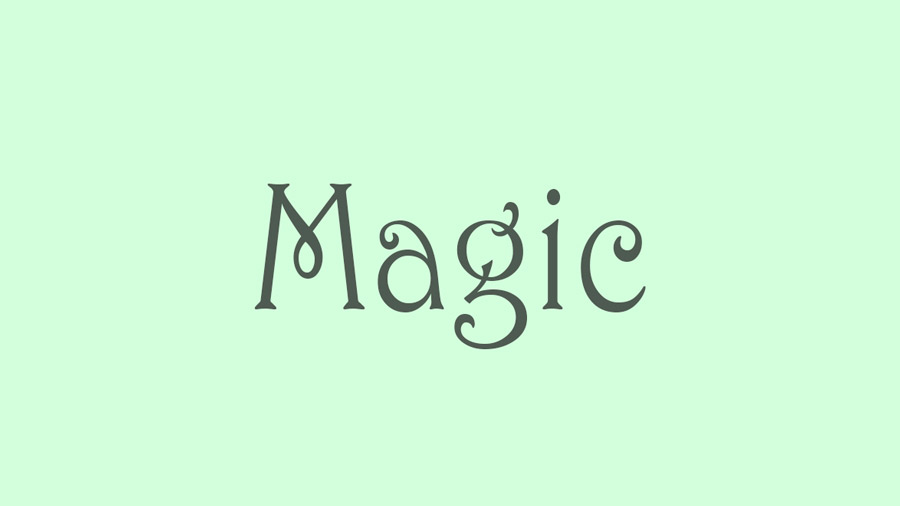 Harrington is a nice playful font which is great for elegant and stylish titles. There is no other way to put this, but the first thing I think of when I see this font is hippies and witchcraft. That could just be me. Regardless I think this is a very nice font and some of the lettering is beautiful.

Harrington is both lower and uppercase but I would not use this font for anything other than Headlines. There is way too much clutter to use this text for big paragraphs of text. 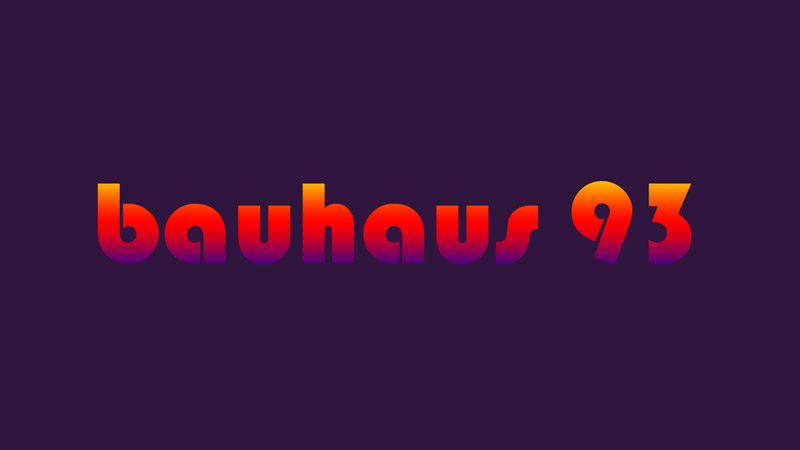 I really like the Bauhaus fonts and I find it very difficult to categorise the font with a particular style. Bauhaus 93 is a great font for logo design and anything considered “arty”. Bauhaus 93 is a good font to play with if you are looking to try something more experimental and striking. This font loves color and it just looks cool.

This font is good for short display titles only, it looks awful when used for long sentences. 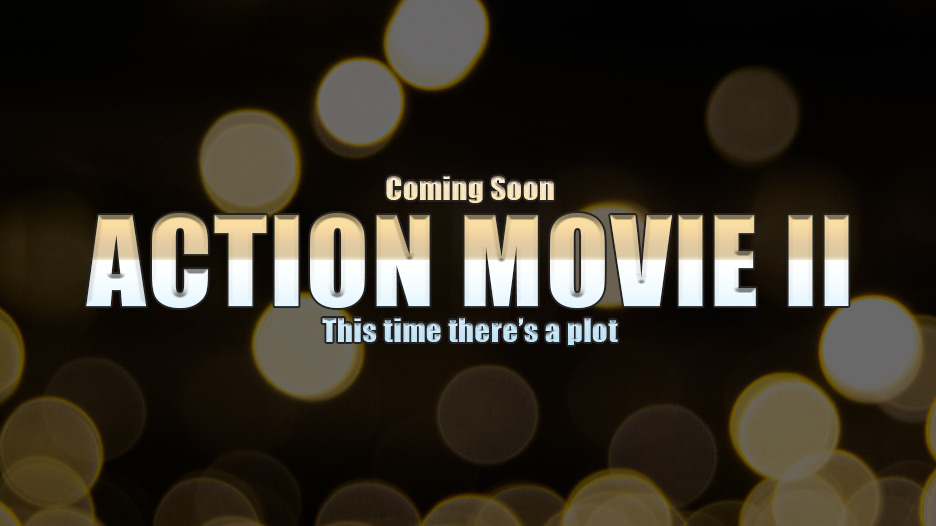 One of my favourite fonts I use it a lot for headers and titles. As the name suggests it’s a bold attention seeking font which is nice and clean. It isn’t much use for anything wordy because it starts to get annoying. It’s great for big titles but it’s not much use for paragraphs or long sentences.

Part of the reason I like this font so much is that it works extremely well with different effects and text styles. Whether it is outer glow, drop shadow, texture or any style for that matter it always seems to work.

To give you an idea of this fonts versatility: this is the same font I used for my grunge text tutorials. For Photoshop and Krita 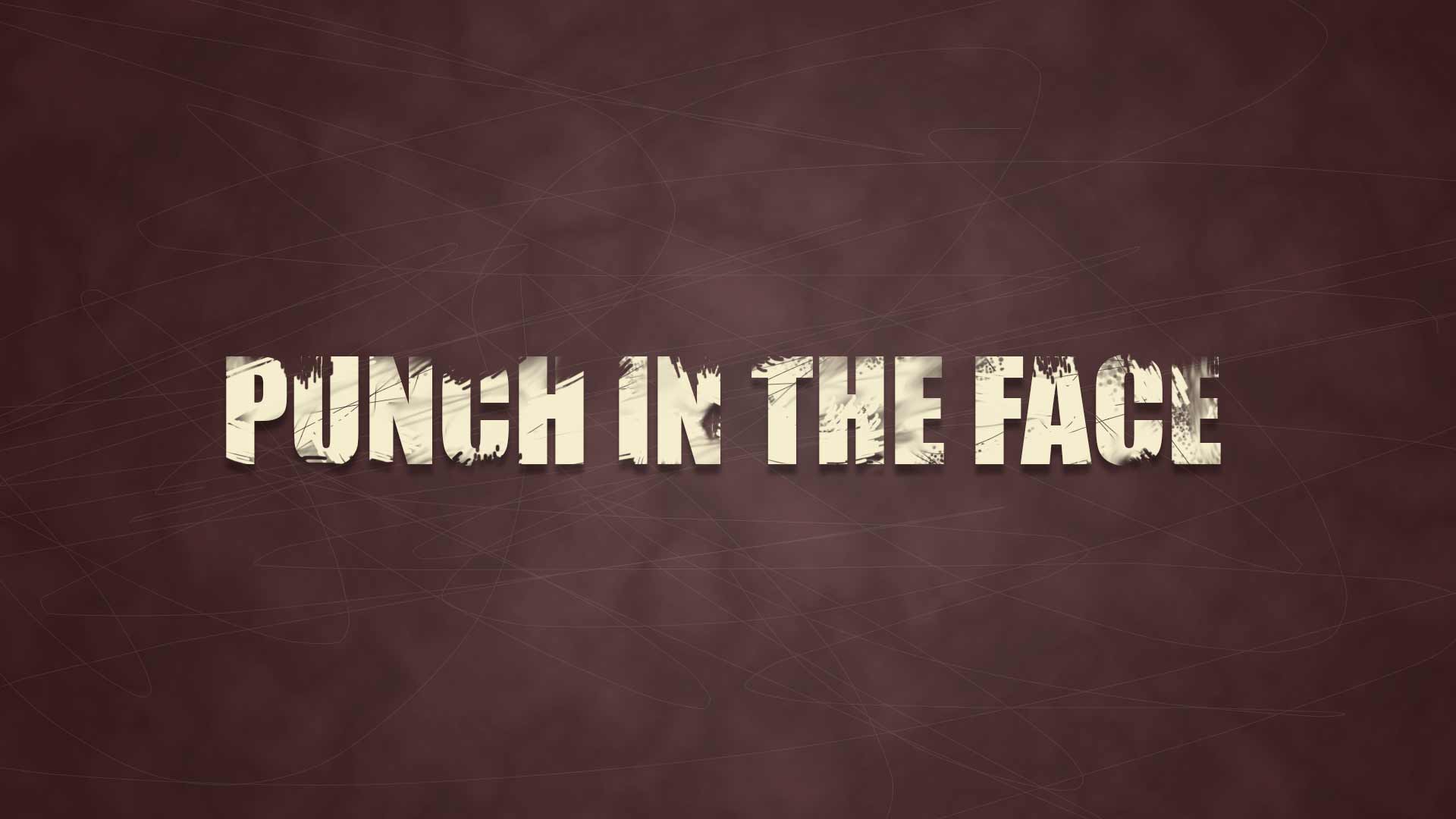 Be careful with this font though as it can look cheesy if not used properly. (I intended it to look cheesy)

I added a bevel and emboss effect with a gradient overlay 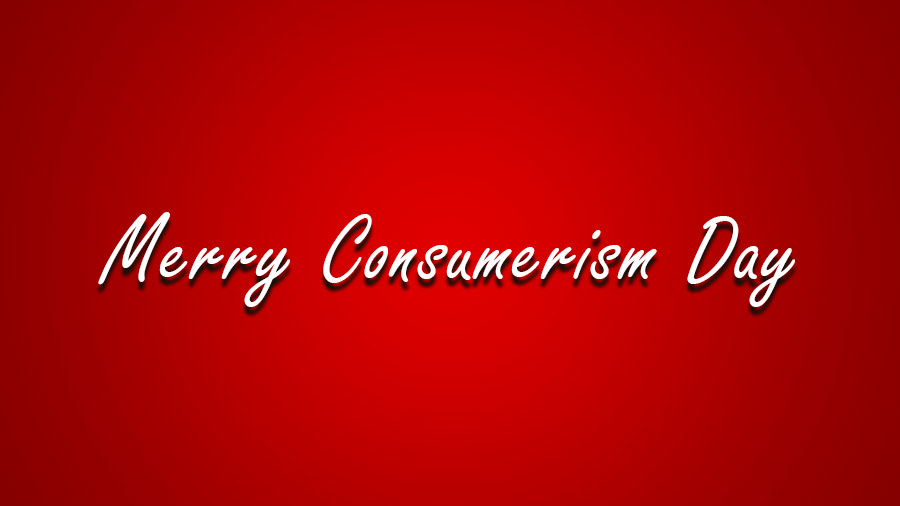 A great freestyle font that simulates handwritten text. I have downloaded lots of freehand fonts that are similar to Freestyle Script but to be honest they are not much better. It is a good clean font which works very nicely for anything celebratory. Fantastic for birthday cards and festive holidays.

It is a great font for restaurants and any business that wants to appear homemade or friendly. It is a very clean font that looks professional in my opinion. It also works very well with different styles.

I added a drop shadow 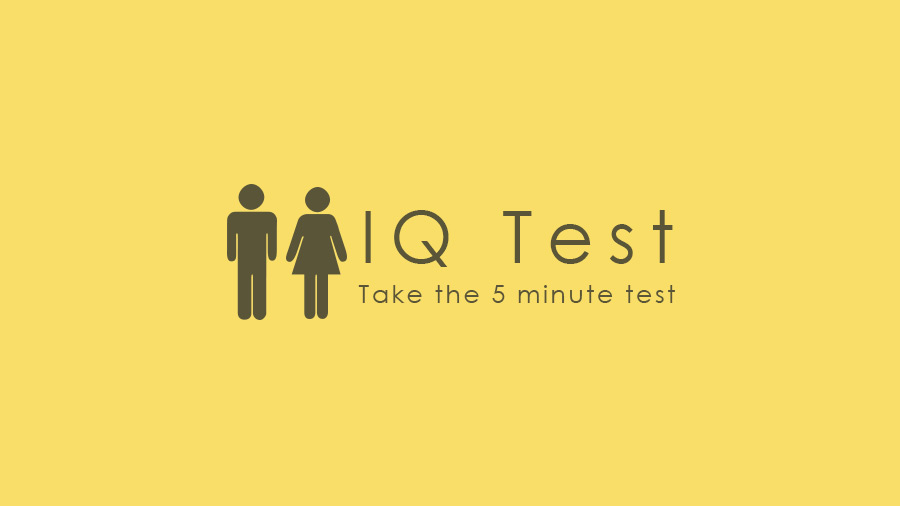 The name Century Gothic is misleading because it sounds like an old gothic font which it is not. It is actually a clean modern looking font. It lacks any real character which may seem bad, but it actually makes it great for ambiguous neutral designs. A font doesn’t always need to portray a strong emotion sometimes lack of character is a characteristic.

Overall a decent versatile font that can be used for titles and large bodies of text.

Courier new is a good font for simulating a classic typewriter. Because of this, I think it is a great font for nostalgia and it reminds me of old military documents. To create the above text I put the font in bold and added a little grunge effect to make it look like an old document. It’s a clean simple font with limited round edges and it tends to look serious and less fun.

It is great for a simple text like scripts and documents where readability is paramount. 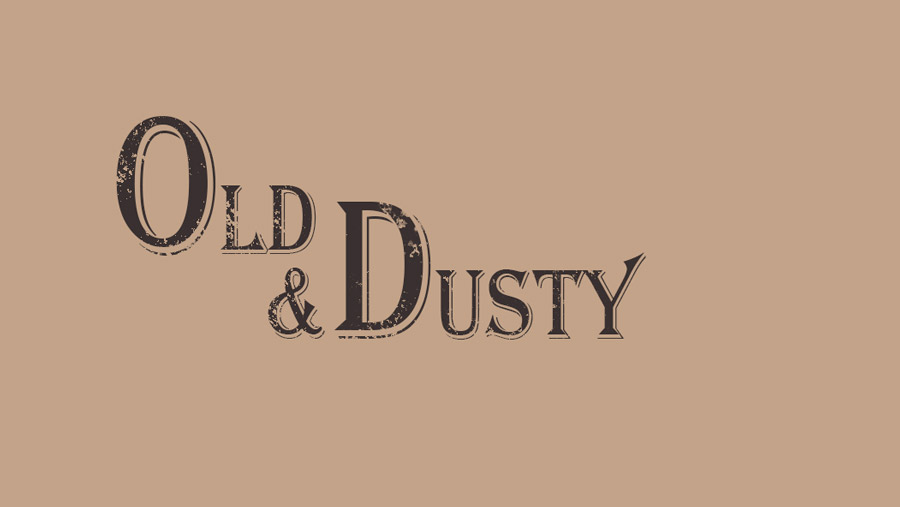 A cool looking vintage font that is great for old-timey stuff. When I see this font I immediately think of the wild west and brewing companies. I could definitely see this font on a beer label. To me, this font just screams heritage and established.

This font is all caps, so it is a great font for headlines but no good for large bodies of text.

Bookman Old Style is a great font for striking headlines especially in bold with block capitals. The font is very versatile and has a traditional look which works with small text and big headlines equally.

I think this font gives off an established trustworthy vibe. Perfect for manipulating public opinion…

Rockwell is a very similar font. 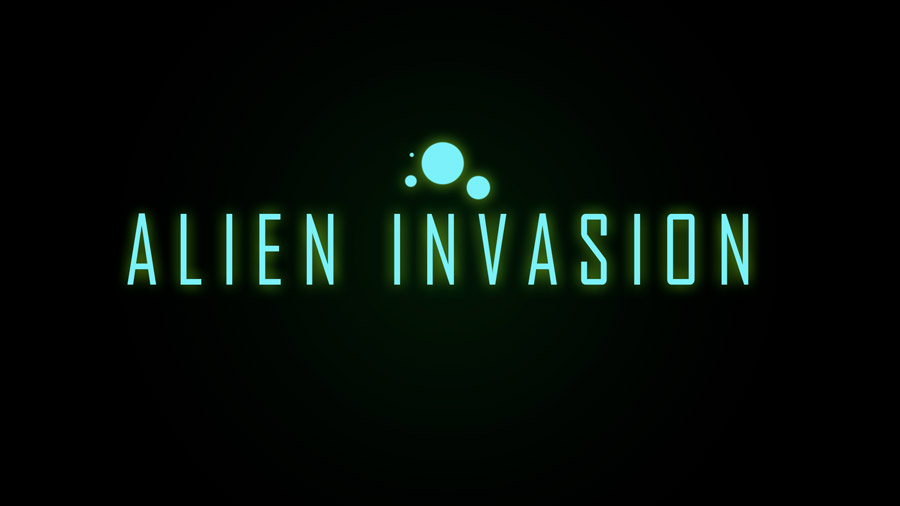 A cool sans-serif font which is great for Science Fiction. It works well for Sci-Fi because it is very angular there are not any round edges. This font comes in many styles but you may only have one or two. I only have Bold and Regular. It was included in the old Microsoft Office bundles and currently comes with Adobe Programs.

A good versatile font that works for titles and large bodies of text. 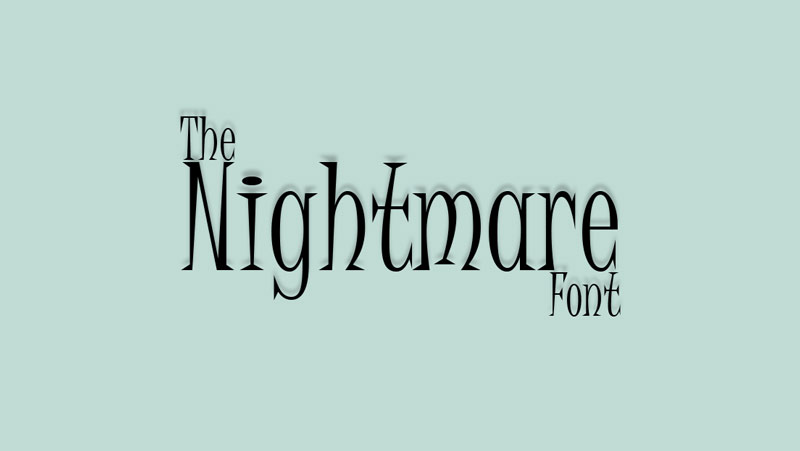 The second I came across this font I instantly thought of Tim Burton. This is a fun cartoony font that would suit any quirky animation. The characters have a somewhat unstable look to them which creates a sense playfulness. The font also has a slightly menacing tone to it too, which is why I went with the Nightmare title you see above. 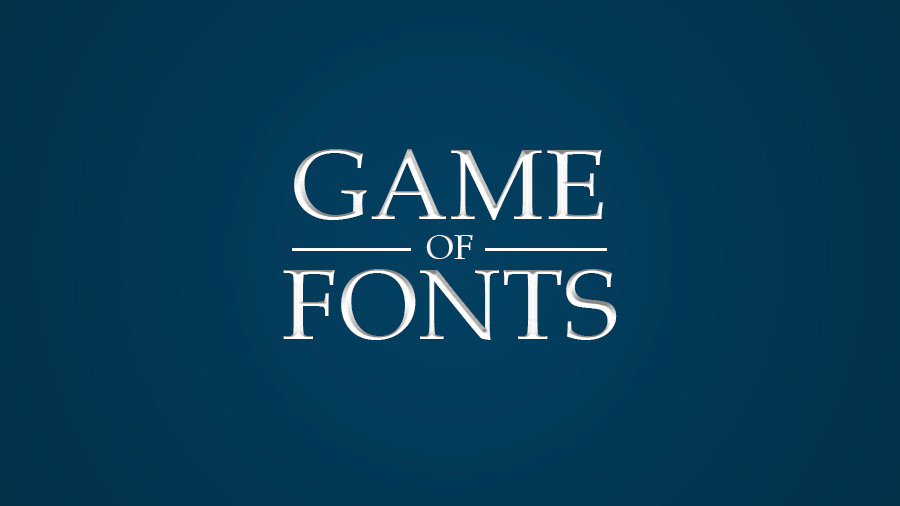 This isn’t the actual Game of Thrones font but It is very close. This font is similar to Times New Roman but I think it looks more interesting. I get a literature vibe from this font and I think it would be great for anything old and epic. The name says it all and I think this font would suit any fantasy fiction book cover.

A great font for headers and big titles but it might get a bit annoying for large bodies of text. This is the case with any stylish font though.

I added a bevel and emboss effect. 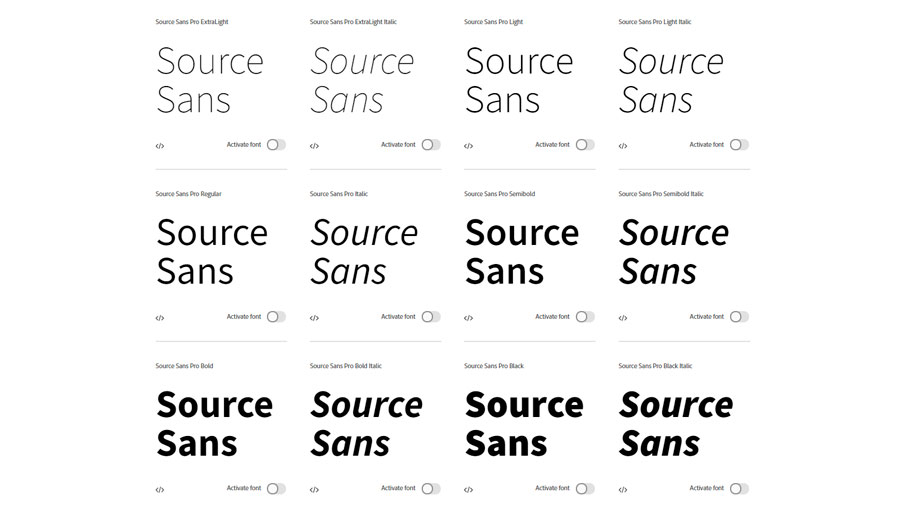 This is actually a collection of fonts including both serif and sans-serif versions. A great all-around font that is extremely versatile. Source Sans is actually an Adobe font that is bundled with products like Photoshop and Illustrator. The main reason I like this font is the number of styles, from extremely thin to extremely bold it is a nice font that looks modern and very professional.

I personally like the really light version of the font, it is good to have a thin narrow font at your disposal.

The only downside is the extremely boring title of the font which is the reason I only discovered it recently.

What about large bodies of text?

I stick to the basics. With lots of paragraphs and important text, the readability comes first. With this website, I installed the theme and left the font on default. I don’t actually know what the font is and it doesn’t really matter.

I stick to the web-safe fonts like Arial, Verdana, Times New Roman, Tahoma etc (the basic Microsoft fonts). It is better to play it safe and these fonts are used by most big websites.

Fonts like Arial, for example, are so neutral they often won’t negatively impact any style or mood you might be aiming for. It is far more important to have clear easily readable text.

As you can see in my examples above, in most cases I used a few effects to add some character. This isn’t always necessary or practical but a big part of making the text more appealing and original is playing with the text/character options. 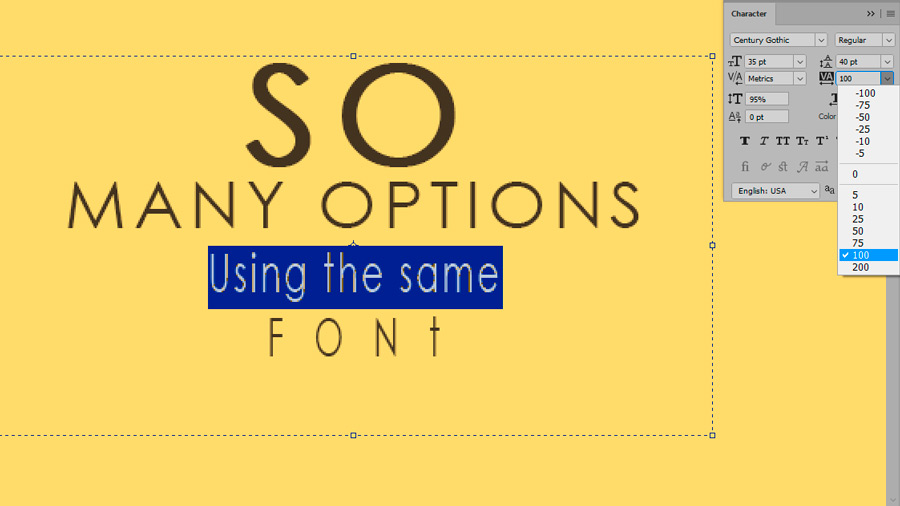 If I am creating a text-based design I always tweak the line height, letter spacing and all the other options to make the text work better. Something as simple as increasing the space between the letters can change the entire mood of the font.

Every font can be tweaked and manipulated.

A huge benefit of using the basic pre-installed fonts is the added safety of copyright. I have had to track down the source of a random font I used once and it is not fun. If I had discovered the font was not intended for commercial use or licensed to another brand I would have been screwed. That is always the risk when you download a font from a third party you might not know where the font came from. It is possible the font was commissioned for a corporation or a rip off of another font.

Sometimes a new font is needed but you will be surprised how much you can do with the fonts you already have.

This is a brief list of my current favourite default fonts, keep checking back though because I will update this with new fonts as I discover them.

If you want to learn the basics of Graphic Design I have an article:

Graphic Designer and Website Designer. Studied Animation and has been using and learning design software for over 15 years. 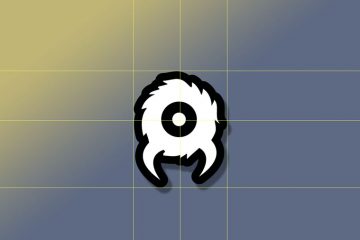 The Secret to Easier Logo Design in Illustrator

I know the title is a bit click-baity but this tip will definitely help big time. There is no one correct way to create a logo in Adobe Illustrator, but there are better and more Read more… 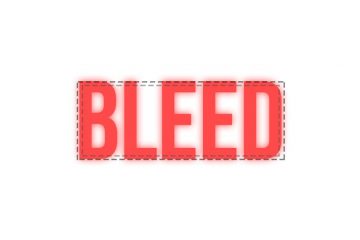 Setting Up Print Bleed in Photoshop

What is printing bleed? In simple terms the bleed is room for error. The bleed allows for tiny imperfections in the printing process and irregularities when trimming the print. The bleed is there to make Read more… 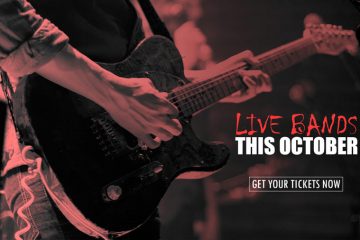 How to Design a Simple Web Banner That Converts

An online promotional banner is often the first thing a user will see when they visit a website. How this big chunk of screen space is used can say a lot about a website. Many Read more…