This photo was taken from a recent visit to a local beach. It’s a long exposure wave taken at night. Despite being very dark the wave was actually lit by a nearby car’s headlights. This was a tricky shot to get – to say the least. 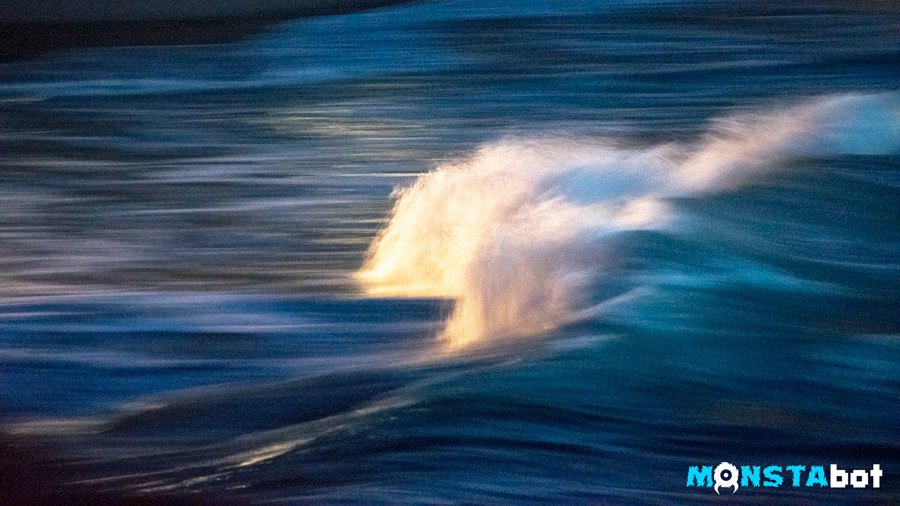 Firstly it was so dark the Autofocus wouldn’t work so I needed to do it manually. Secondly, the shutter speed needed to be around 1/8 – 1/5 of a second to get a bit of motion blur. If I went any slower the blur was too much and the shape of the wave was lost. If I went any faster the image would be way too dark. The final issue was the high ISO grain which looks pretty bad in the dark areas. 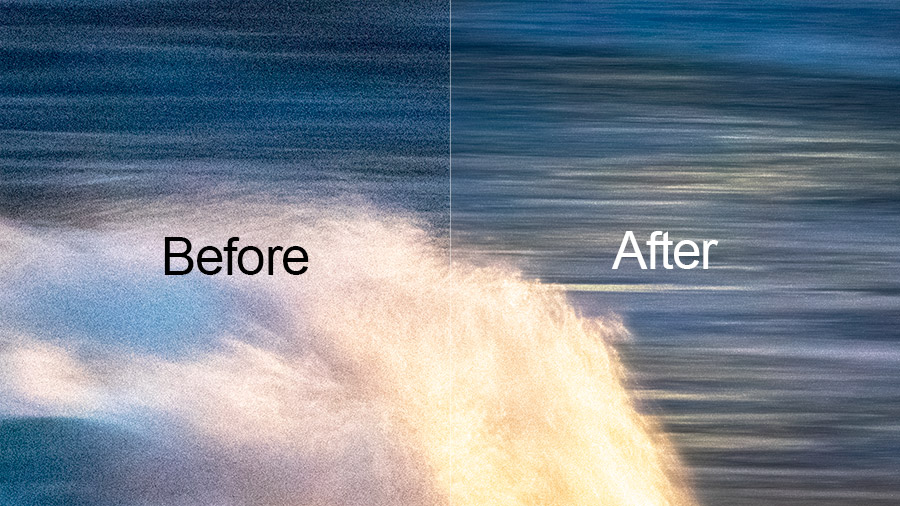 This shot represented a unique challenge: can I reduce the ISO noise without losing the mood of the photo. And how clean can I make the final image?

The ISO in the bright areas doesn’t bother me because the white water was turbulent. I personally think the grain gets lost in the highlights so it doesn’t really matter.

What first seemed like an obstacle but turned out to be a benefit was the motion blur. To cut a long story short I added to the motion blur that was already there, I used this to blur out the ISO grain in the dark areas. The end result was shockingly effective I was surprised how well it worked.

I would say this technique is on the advanced end of the spectrum but hopefully, I make enough sense. If you would like to see how I did this keep reading.

This not strictly a tutorial its more of an insight into how I edited this photo.

So firstly I do some basic RAW edits and then import the image into Photoshop. I set the sharpness to zero its usually 25 by default. I did not do any noise reduction in the RAW editing.

As you can see the worst of the ISO grain is the dark areas surrounding the wave. This is where I will focus my attention. 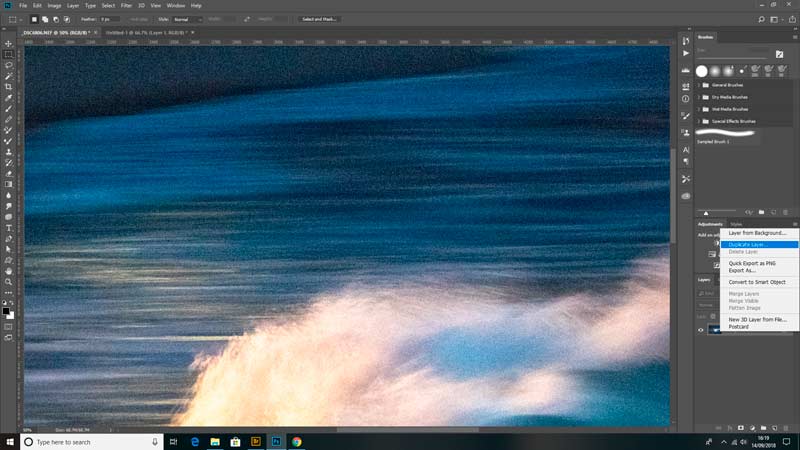 So the first thing I do is duplicate the original layer (ctrl+J). This layer will be the layer I apply the motion blur filter too. 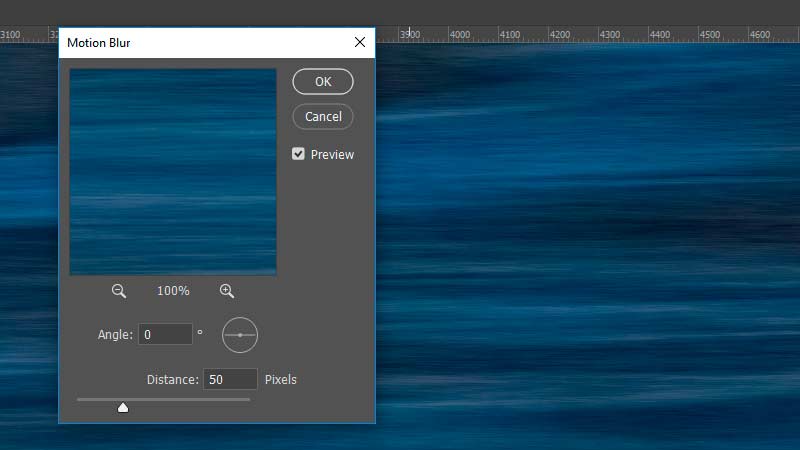 To apply the motion Blur I go to: FILTER > BLUR > MOTION BLUR.

Angle: This is the direction of motion blur, zero is set by default and luckily this matches the horizontal blur I already have.

Distance: This is the amount of motion blur. I was looking for the lowest value at which the grain will disappear into the blur, this occurred at 50px. 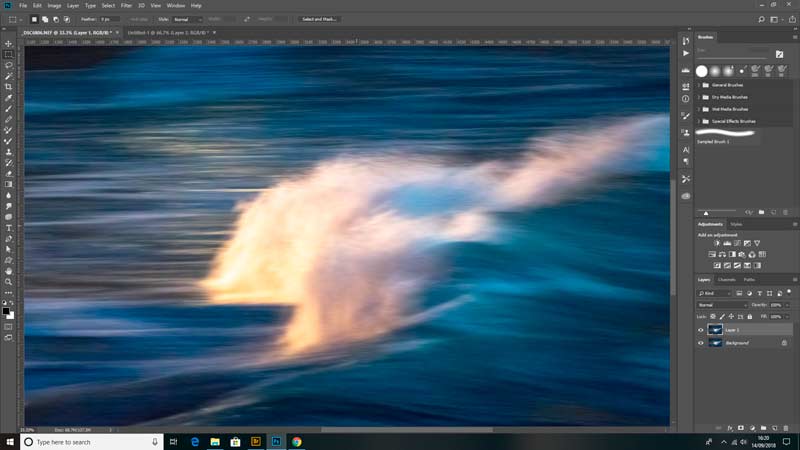 So I have a blurry photo with greatly reduced ISO grain. Unfortunately, I have completely lost all the detail in the centre of the wave, how do I get this back?

What I need to do is create a layer mask for the blurry layer. This mask will make sure the blur is only applied to the dark areas and it will leave the bright areas sharp.

Layer masks are always monochrome, black being transparent and white being opaque. To make my mask I am going to use the contrast already present in the photo.

I do this by once again duplicating the original background layer (no blur on this layer). I then move it to the top of the layers and hit desaturate. 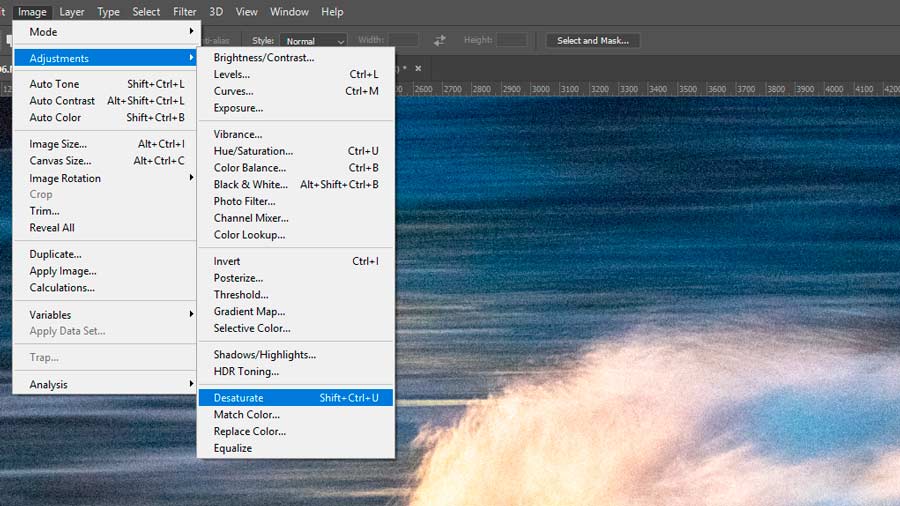 This desaturated layer will become the layer mask for the blurry layer. 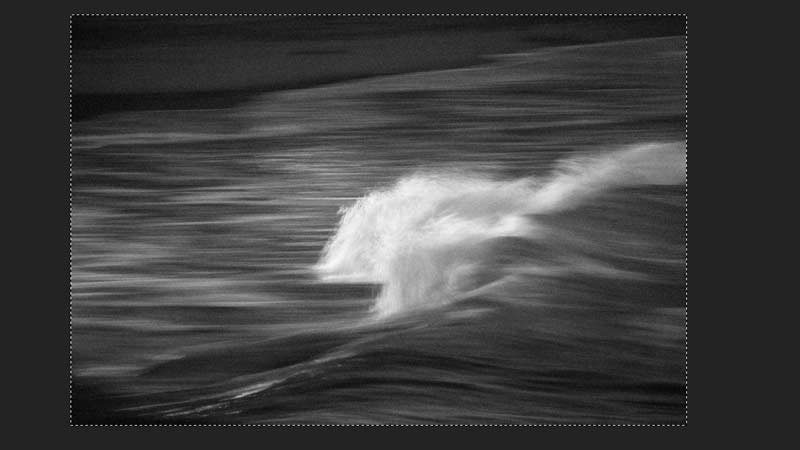 I need to make this new desaturated layer the mask for the blurry layer. There are several ways of doing this, I am going to do it using the channels. 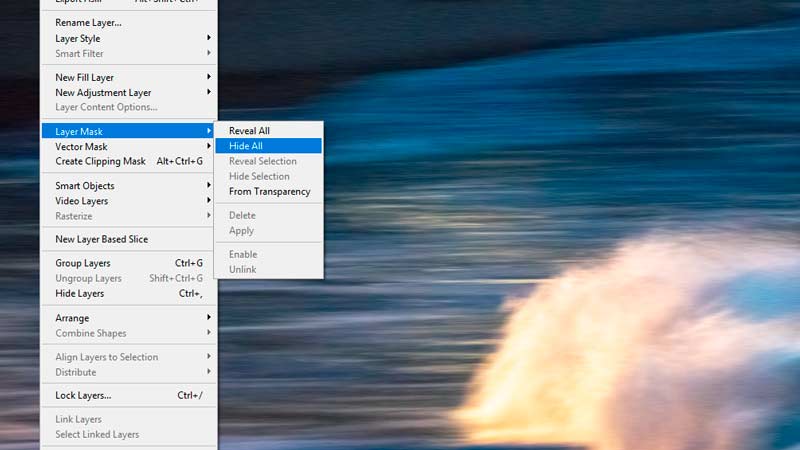 I select the Blurry layer under the desaturated layer and then go to LAYER > LAYER MASK > HIDE ALL. This will create a new empty mask for the blurry layer. 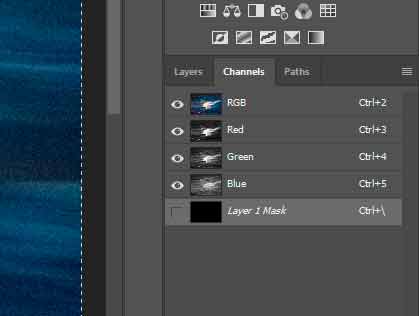 If I open the channels tab you can see my newly created mask. The channels you see are dependant on which layer you have selected.

I go back to the desaturated layer and hit select all and then copy. 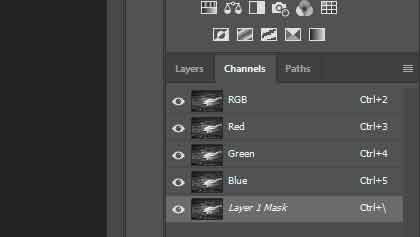 Next, I select the blurry layer again and I go to the channels tab for that layer. I then paste the contents of the desaturated layer into the layer mask channel.

Back to my layers, I can now hide the top desaturated layer because I don’t need it anymore. I am not going to delete it though. You can see my layer mask for the blurry layer has now changed to the image I just pasted. 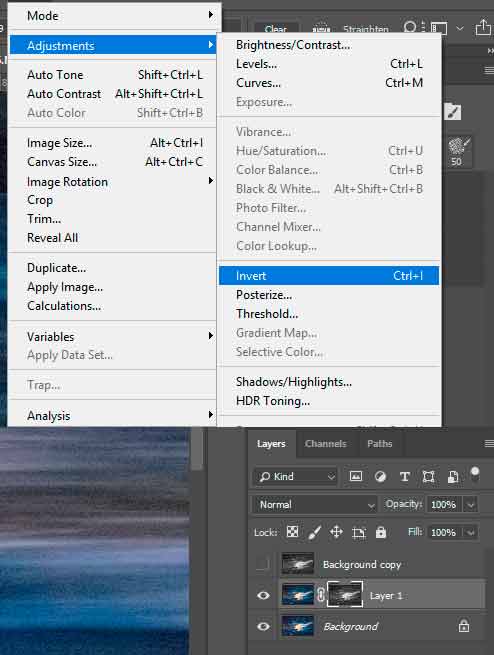 Next, I need to invert the mask because it is actually having the reverse effect of blurring the bright areas and not the dark areas. This done by selecting the layer mask and going to IMAGE > ADJUSTMENTS > INVERT.

This will invert the mask layer making the blacks into whites and vice versa.

I can now tweak the levels and the contrast of the layer mask to adjust the effect of the mask but generally, I am happy with it. There is a slight edge glowing effect on some of the white water but it doesn’t really bother me. This photo is fairly abstract so I think I can get away with more extreme changes.

Once again this is the before and after. (flipped)

This was a very unique challenge and this technique would not be applicable to all images but I’m sure it would work on other photos with a motion blurred background. It is definitely time-consuming and it took me a few attempts to figure it out. I have a few other shots from this session that I can’t face fixing just yet.

I was very fortunate that the wave was well illuminated, I don’t know if this would have worked as well if the wave was just as dark as the background.

Hopefully, this technique demonstrated the importance of holding on to your photographs even if they are not technically perfect. I never realized this was possible until I tried it.

One day in the future you may discover a way of editing an old photo you are not happy with today. 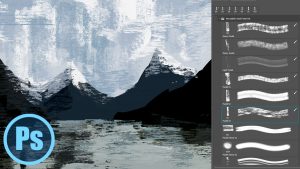 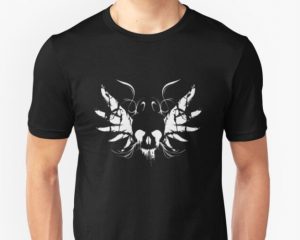